Flood Protection – Should we be building an ark? 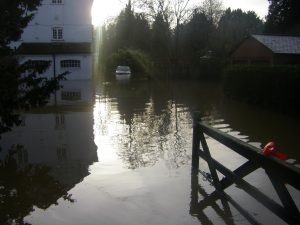 FLOOD PROTECTION – SHOULD WE BE BUILDING AN ARK?

In the past ten years there have been at least 13 incidents of serious flooding in the UK with only 2006 and 2011 offering respite. So frequent have these occurrences been that up to five million homes are considered to be at risk. The recent storms Desmond and Eva flooded 16,000 homes in England alone.

In December 2013 severe flooding in Mole Valley and elsewhere in Surrey made a misery of Christmas for around a thousand people.

Surrey County Council published a draft Local Flood Risk Management Strategy document in August 2015. There are several types of flooding that have to be considered, including River (fluvial), Surface Water, Groundwater, Reservoir and Sewer.

The main concerns appear to relate to surface water run-off and sewer back up, which affects properties on high ground as well as those close to rivers or reservoirs. In fact properties on higher ground are more likely to be exposed to these dangers, as surface water is likely to take longer to dissipate due to the composition of the soil and the lack of exposed soil that can absorb the liquid.

Surrey is currently undergoing a rapid domestic building boom. However, due to Green Belt restrictions this means that new houses are mostly constructed within existing housing boundaries. So we are witnessing higher density of housing, greater levels of run off and increased pressure on the capacity of aging sewers.

While the Environment Agency and other bodies seek to discourage new homes being constructed in fluvial flood areas, no such incentives apply to other properties.

We all owe a duty to our neighbours not just to protect our own homes against flooding, but to consider the effects that paving over drives and patios, pouring grease and fat down the sink, or removing trees and shrubs may have on the ability of local flood defences to cope. Perhaps we should also ask Local Government to consider the consequences of allowing unfettered construction in the ever encroaching suburbs of London.

If you live in an affected area of Surrey, or indeed any other area in the UK where there have been problems in obtaining insurance for flood at an affordable price, the newly introduced Flood Re scheme means that we have some insurers who are looking to insure these types of homes.